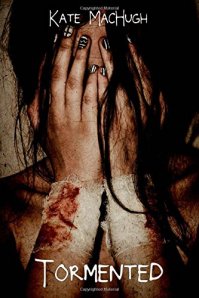 Earlier this week I joined a group on LinkedIn of authors that write what is considered edgy for Young Adult Fiction. One of the authors posted about their book Tormented. It is currently free on Amazon for Kindle users. As this novel talks about some of the same things I do in my own books, Destroyed and Punished, I thought it would be a good idea to take a look.

First, I loved the story. It was written from a multitude of viewpoints and also switched from present to past. The novel opens with an officer heading to a house where a teenage suicide has been committed. Initially I was skeptical, mostly because I’ve read stories where the aftermath of the suicide is well presented. Nothing of what leads to that particular event is discussed (an exception in my opinion is Thirteen Reasons Why by Jay Asher). In this novel, the author did both. The posted dates allowed me to easily follow along and figure out where exactly I was in the story (past or present). The events were well-told. This book beautifully encompassed all the horrors that come with rape, loneliness, loss of sense of self, bullying, and suicide.

What I liked most was the reality of the consequences. If you have never attempted to take your own life, to me it seems you can’t begin to comprehend what could lead a person to such a decision. This doesn’t mean I’m right. In this story, there is a person like that who exists. In fact, she is the cause of everything. In the end of the novel, the licensed social worker she has been court ordered to see diagnoses Quinn (basically the antagonist) as having Narcissistic Personality Disorder. She is the one who tortured Kelly (the protagonist) and ultimately forced her to commit suicide. Quinn later murders Liz, the girl who helped her bully and torment Kelly. With the lives Quinn has taken, she is arrested and will live her life in jail.

Unfortunately, it isn’t always so simple. Bullying is only one of the causes of suicide. With so many other causes out there that we may not be able to prevent, we should focus on the ones in our control. Stop bullying. If someone does bully you, tell a parent, a teacher, a counselor or someone you trust. This book draws great attention to something we can all stand against.

Krys Fenner has been infinitely passionate about writing and helping people for as long as she can remember. To date, she has published three books, numerous poems, and is now avidly working on a Dark Road series. Krys received an Associate of Arts in Psychology and has nearly finished her B.A. To find out more about Krys Fenner and her upcoming book releases, visit her official website: www.krysfenner.co View all posts by AuthorKrysFenner