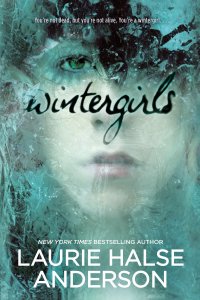 I had a hard time with this book. Unfortunately, I can’t quite explain why. A couple of days ago, I finished Wintergirls by Laurie Halse Anderson. Originally I picked the book up because I love the author. I remember reading Speak and how much I loved it. I assumed this book would have the same effect, but that isn’t the case. Instead, it reminded me while we may like one book by a certain author, we may not care for another. I thought after a couple of days I might have come up with some kind of reason why this book was so difficult for me. Still I have nothing.

Wintergirls is about two girls with an eating disorder. The story is told from Lia’s point of view after her friend Cassie dies. The one thing I loved about this book is that Cassie’s death (over half way through) is described. I know this seems odd, but with this type of mental disorder it is hard to really understand all possible outcomes. Being someone who is overweight and has been most of their life, I can understand how someone can eat themselves to death. I can even see how someone can starve themselves to death. But these aren’t the only type of eating disorders.

Growing up I recall hearing about two eating disorders – Anorexia and Bulimia. Wintergirls deals with both. Lia is anorexic and Cassie, the one who died, is bulimic. The bulimia kills her because she throws up too much. Her esophagus ruptures and causes her to asphyxiate on her own blood. She dies alone in a painful and horrible manner. The worst part is – it was by her own hand.

The death isn’t the reason I had such a hard time reading this book. While I could relate, I couldn’t relate on the level of the story. I, myself, had body issues when I was younger and sometimes still do, but not to the point of an eating disorder. But I don’t think this is what took me so long to get through the book. It was a well told story. It was a disturbing story with a good ending.

What bothered me and took me so long to read Wintergirls was how far down the hole a person could get. It reminded me of my own hole. What made the story work – hope that we can all get out of our hole, no matter how far down we are.