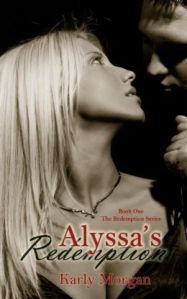 I have mixed feelings over this novel. I loved the story idea, but I found the writing difficult. Let me rewind a moment. Amongst my packing, I decided I needed a break and decided to read a book. The problem was I had already packed all of them, but I still had my nook. It had been so long since I read anything on my nook, I didn’t remember if there was anything I hadn’t read on it. Lo and behold there was. I had downloaded the first part of Alyssa’s Redemption, but I hadn’t read any of it. If you search the novel on Amazon for Kindles or B&N for Nook, the first part is free. It will say “Part One” where as this copy is the entire novel and says “Book One.”

So I lay down and I read the first part. About 111 pages. I liked the story. Alyssa has survived abuse from her ex-boyfriend and is now working in a crappy bar for a horrible boss just to make ends meet. I applaud the author for the worthy tale. Especially when her ex-boyfriend’s brother buys the bar. Not only is she forced to confront a strong attraction to the brother, but she is also forced to deal with the events that transpired between her and her ex-boyfriend, Eric. Unfortunately, her Eric reappears and goes after Alyssa. What makes all of this worse is while she is falling in love with Cameron (the brother), they find out Eric has a tumor and Alyssa has been given Power of Attorney over his medical decisions. Once the tumor is out, Eric wakes up with amnesia. He doesn’t recall anything that happened between him and Alyssa and she has to play the role of the loving, doting girlfriend. Admirably, Alyssa deals with all the emotions she has let build and control her life. As I said, this was a great story. I would very much like to read the next part of the series, but I haven’t found it.

And this is where I come into my problems. The writing wasn’t horrible, but it wasn’t great. I felt like this story could have been so much stronger than how it came out. The other issue I had, which I have with any novel, is the flip between point of views with no break. Only Faulkner has ever done this well. I perfectly understand telling a story from the viewpoint of multiple characters. It should either flow and continue throughout the story at all times or break up the viewpoints. This did not occur and made the book very confusing at times. I got tired of keeping track, so I stopped. I read it as best I could.

All in all, I would give Alyssa’s Redemption 3 out of 5 stars.