I am a hard critic. I am difficult to please. And I am bluntly honest. Anyone who knows me will tell you this. I have a standard in life and in books. And I expect it to be met, even with books I review. I was given this novel in exchange for an honest review and for the first time, I can say I am pleased. I ABSOLUTELY loved, loved this book. A Life, Redefined is the first in the Rowan Slone series and it was a well-written, well-developed, and had a cliff-hanger that kept me fully involved. In fact I was only scheduled to review the first novel in the series on this blog tour, but I read all three in two days. I was hooked and I simply could not put the series down. I had to know what happened. I give all three books a 5 star rating. Spoilers ahead, continue at your own risk. 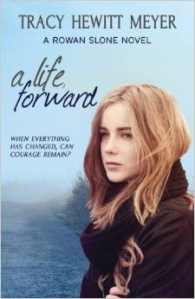 A Life, Redefined is the first novel in the Rowan Slone series. Rowan Slone has had a rather difficult life. She is hated by her own family, blamed for her brother’s death, and pretty much surviving as an outcast. A moment of possible happiness pops up in her life when she gets partnered for a Biology project with Mike Anderson and he asks her to the prom. Her sliver doesn’t last long. In fact, her sister turns up pregnant and claims Mike as the father. Just when things can’t get worse, Rowan’s sister says Mike raped her.

There were so many things I loved about this book. I loved the way Meyer pulled all the issues into one novel, but left nothing uncovered (teen pregnancy, false rape allegations, miscarriage, cutting, a suicide attempt, feelings of being unloved and unwanted, guilt, blame, shame and so much more). It is told from Rowan’s point of view, so you get a full glimpse into how she sees everything. Yet at the same time, there were secrets of hers that weren’t immediately revealed. Throughout the novel, she talks about how she wears jeans, long sleeves, and a hoodie with ARMY written across the front. Right away, we find out she used to be a cutter and nobody knows. Not even her best friend Jess. We don’t know how bad this is, until things go from bad to worse. Then her struggle becomes more prominent for the reader. By the end of the novel, she has cut several more times and still people don’t know. A ton of issues were touched on in A Life, Redefined. Meyer did a beautiful job of pulling me into Rowan’s feelings. I could easily explore and understand everything she felt as she tried to figure things out and have a functional life. By the time I put this book down, I was ready to read the second in the series. I was hooked.

I pretty much felt the same when I read the second book, A Life, Forward. I think the only difference between A Life, Forward and A Life, Redefined was that I felt so much more connected to Rowan in the second book. In fact, in one of the scenes when she is sobbing, I cried a little with her. At this point, we now know Rowan didn’t kill her brother, her mother did. Her mother has gone to jail and it is alluded that she is serving a life sentence. Rowan mentions she believes her mother will spend the rest of her life in jail, but there is nothing that directly confirms she will. I’ll come back to this because I see this as a key point in the third novel as well. Mike and Rowan are dating, he has graduated high school and left for college. She is now in her senior year. Her dad left. Her sister Trina is on drugs and Rowan hasn’t forgiven her grandmother for keeping her mother’s secret (that she killed Rowan’s brother). Rowan has moved out of her family home and moved in with Mike’s parents.

Again, things start happening. Her dad shows back up, not only asking for forgiveness, but also dying from lung cancer. Rowan’s shock didn’t surprise me. The fact that she hadn’t forgiven her father for his lack of love and for the physical abuse was understandable. Then for all of that to be dropped in her lap? This was likely more heart-wrenching for me because my own mother was diagnosed with cancer three years ago. Thankfully, unlike Rowan’s father, it was caught early. Unfortunately the same cannot be said for Rowan’s father. When it seems Rowan and her father might find a way to connect, he dies. Just after her father’s death, Mike discovers Rowan’s cutting. They get into an argument the day of the funeral and break up a day or two later. I can understand how heart-breaking this could be. To top things off, she still doesn’t know how to handle things, then Mike’s mother accuses her of using drugs. This doesn’t even include that she is trying to be there for her best friend who finds out she’s four months pregnant. Meyer’s did another great job with covering every raw emotion that Rowan could possibly feel. Despite all the bad things and the loss of her father, I love that Rowan figures out a way to start healing. Something she doesn’t really conclude she needs until the third book, A life, Freed.

On her own for the first time, Rowan Slone is no longer waiting for the future. She’s living in the present, and relishing every minute of it. She has a new boyfriend. She is helping best friend, Jess, raise her five-month-old son, Jacob. And she continues to work as Assistant Manager at the animal shelter-all while settling into her first semester of college. Rowan’s stars are aligned and she’s not looking back.

But all is not as golden as it seems. Being a young mother is too much for Jess to handle, leaving Rowan to shoulder much of the burden of raising Jacob. Trina becomes involved in a religious cult causing Rowan to fear she may have lost her sister forever. And her mother has a new psychiatrist whose goal is to get Rowan into therapy, forcing her to deal with her mother, and the past, once and for all.

Adding to the rising turmoil, Rowan’s first love, Mike Anderson, returns, and wants to see her. She is surprised how much she wants to see him too. But his sudden reappearance makes her wonder if there is room in her future for the boy with the pine-colored eyes or is it too little, too late?

As the winds begin to stir, threatening to send Rowan’s carefully-built life into a tailspin, she must search deep inside herself to discover what she truly wants. Will soul-searching help her achieve that elusive sense of peace and family she’s always craved or will the pain of the past prove too great?

A Life, Freed just released. I will tell you my thoughts, but I won’t give away much in the way of spoilers. By the end of the second novel, Rowan has been accepted into a nearby college. She has graduated high school, found an apartment for herself and her best friend Jess, and gotten a tattoo to cover up the scars from her cutting. In the beginning of the third novel, Jess’s son is now five months old, she shares an apartment with Rowan who still helps out with the baby. Rowan is in college and dating a new guy, Shane. Everything stirs up when Mike sends Rowan a text asking if they can get together while he’s in town and Jess decides parenthood is just too much and takes off. Despite having a new boyfriend, Rowan’s feelings for Mike have not changed. Neither have his. Something they both have to figure out how to handle. What I loved was that by the end, Rowan accepted what people had been suggesting all along. When she finally realizes she does need to heal and can’t do it on her own. I commend Meyer because this is something a lot of people (not just teenagers) struggle with. I myself have been in that position. And it takes a great deal of courage to admit when you need help.

When I finished the second novel, I realized these three books reminded me of another set of books I had once read (After the Leaves Fall, Summer Snow, Beneath the Night Tree by Nicole Baart). I loved them the way I love these.

If you would like a chance to win the first novel, there is an E-book giveaway for 5 copies. Click here to enter.

I mentioned I would come back to the Mom issue. The third book covers a lot, but since it isn’t confirmed Rowan’s mother will in fact be in jail for the rest of her life, I wonder if there is the possibility of another book. While Rowan deals with a lot of stuff, her relationship with her mother does go unresolved. Something to think about.

One thought on “Review of A Life, Redefined by Tracy Hewitt Meyer”