Suffice it to say I was quite happy with this book. That doesn’t mean there weren’t problems or  no issues, but the story was just that good. Before I get ahead of myself, let me share the synopsis. Then, and only then, will I get into my review. And heed my warning now, there may be SPOILERS.

Carlie made a suggestion; a suggestion I wanted nothing to do with at first, but she was my wife and I’d have done anything to make her happy. I went along with her plan, even though I really didn’t want to.

It actually worked, for a while.

Then I wasn’t doing it for her anymore.

Instead, it was all about secret liaisons, stolen moments and the thrill of getting caught.

My life changed overnight and there was nothing I could do to prevent it. Lust is an unstoppable emotion when it takes hold.

Rules are broken. Mistakes are made. Lives are destroyed.

Be careful what you wish for, because sometimes, that wish can come true.

Zachary Black was her wish.

…Until he became mine.

Before I dive into the good stuff, let me get my rants out of the way. There were a few grammatical errors: missing words, extra words, lack of commas, etc. You get the idea. Plus a change of shift too. Leaned vs leant. Drives me nuts. But if the story is good enough, I can momentarily overlook all this to keep on reading. Can you figure out what I did?
I kept on reading. The first few chapters weren’t much to get through. Initially I simply couldn’t figure out their purpose. Then I realized, back-story. The perfection of Blake and Carlie’s marriage has to be shown. Or at least the image. Obviously it wasn’t perfect. And this is quickly established. Blake would rather be at work than at home with his wife. Even when he gets a promotion. Are you sensing trouble in paradise yet? I was.
Now, I can’t say I had any love for Carlie. She wasn’t stupid. Chick learned a whole other language because it turned her husband on. In the beginning I gave her props. By the middle, I didn’t like her. Not one bit. I still didn’t care for her very much towards the end, but she does kind of get shafted. Too bad she can’t in some small way accept her own blame.
But she’s only part of the story. Truly, the story belongs to Blake and Zach.

Their story addresses the old age question, “Do soulmates exist?”

First, do you believe in soulmates? I do. I believe there is one person meant for one other person. That we each have this pre-established link, where there is one unique person designed for each of us.

And Blake and Zach have it. Now, Blake is married, so this is obviously going to cause some trouble. Especially when Blake isn’t really prepared to admit to himself what is going on. It isn’t lust, but he can’t explain why he finds himself completely attracted to Zach. And why having him becomes so important. 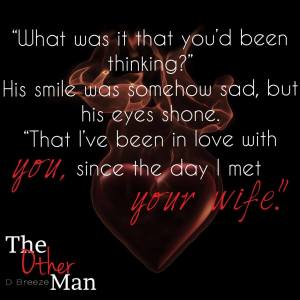 After suffering a work-related injury, it made sense Blake might ask for some time. The problem was he already knew what he planned to do, he just wasn’t ready to face it. His claim, “I’m not gay,” kind of reminded me of another man couple I loved. I’m almost pretty certain Quinn (BDB) said those exact same words.

The  talk about marriage kind of had me chick-flick out a moment. Reminded me of another conversation between two guys in He’s Just Not That Into You. Also about marriage. I kind of disliked Blake a little after this conversation. But then I wondered, would he have come across Zack in another way? What if Blake hadn’t married Carlie and she  hadn’t invited Zach into their bedroom? Hmm, quite curious.

Here’s the thing, everything you think might happen in this book does. Then you get to the end and BOOM, shit explodes in the worst kind of way. You’re left wanting to turn another page because you have to know what happens! But it’s the end. And damn it all to hell. How are you supposed to find out what happens next? Do Zach and Blake get their HEA? Is Carlie… well, I can’t spoil everything. The good news? There will be a second book.

As for this one, I give it 4 stars. It’s a very seductive read. And I promise, it WON’T disappoint.