A couple of weeks ago in one of my classes, we had to create a discussion post analyzing everyday text using the literary theory we had just learned about. One of my classmates chose to address the Netflix series Thirteen Reasons Why. Now, I haven’t seen the series yet, but I’ve read the book so I understand the premise for the Netflix series. I’m also aware there are some things that were changed, for example, the way Hannah commits suicide is different. I’ve also seen and read some of the articles that have been published since the series released. The show has drawn both negative and positive comments, much like the topic itself.

About a week before this I read a string of comments on Facebook and some of the things people said irked me to my core. I generally don’t comment on strings like that, but I felt it absolutely necessary to say something.

It isn’t just because I’m passionate about suicide, it’s because I’ve been there. I’ve been on that ledge.

When I was 19, I locked myself in the bathroom of the two bedroom apartment I shared with my roommate. I dug a blade out of my razor and cut along a vein in my left arm.

Two things saved my life that day. One, I didn’t know much about what I was doing. Two, my roommate knocked on the door before I had a chance to cut my right arm.

For many years, my family knew nothing of what happened. I didn’t get the help I desperately needed. Instead, I found another way to destroy myself. A way to numb the pain until there was practically nothing left of ME. 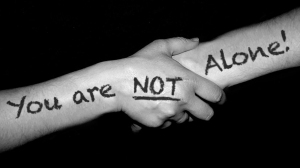 Now, I get that people are afraid the series romanticizes suicide, but I think they’re missing the point. It isn’t just about getting people to talk about the topic of suicide. And it isn’t about making money as my classmate suggested. And it isn’t trying to say suicide is okay.

It’s about seeing the warning signs. It’s about understanding what they are and how to address them. It’s also about letting teenagers who are contemplating or have attempted suicide that help is possible. That they are not alone in how they feel. Most importantly it’s about helping outsiders understand what that person is going through.

Too many times people call suicide “selfish,” but it’s not. When you are truly thinking about suicide, all you think about is the people around you. It was all I thought about.

I thought I’d no longer be a burden on my family. I thought my friends didn’t really need me and that they’d be better off if I wasn’t around.

I know now that none of that is true. My family would’ve missed me. And if I had committed suicide, I wouldn’t have been there to support my friends the way I have. I also wouldn’t be here today to share my story.

And that is something I’m grateful for. It gives me hope that stories like mine and Hannah’s can save someone’s life.

This is why authors write books like Thirteen Reasons Why. All we want to do is make a difference.