Last October, towards the end of the writer’s conference I was attending, I was sitting down at breakfast and having a discussion with another author about being independently (Indie) published or self-published. We agreed that it wasn’t possible for an Indie author to be successful without thinking about publishing as a business. Now this could be countered by pointing out that we each define “success” differently. While this is true, what the author said about Indie author’s is also true.

So how can they both be true? I’ll tell you.

Let’s start by looking at the definition of “success.” According to the Merriam-Webster dictionary “success” is defined as the “degree or measure of succeeding” or a “favorable or desired outcome,” as well as “the attainment of wealth, favor, or eminence.” 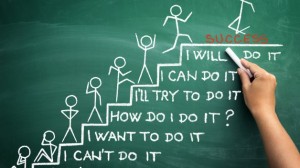 If we looked at “success” as being a “favorable or desired outcome,” then anytime we get what we want would be considered a success. If you received the promotion you worked all those late nights to achieve or the bonus you’ve worked hard to receive, then you’ve been successful.

But how can we relate this back to the world of publishing?

What if you’re a new author and you landed that agent you’ve been after or you got offered your first book deal (even if it’s only a few thousand dollars in advance), would these be considered successes? Yes. What if your goal was simply to get your book out there? If you accomplished that task, would that be considered a success? Yes.

If any accomplishment, small or big, makes one successful, then how does the third definition apply?

Good question. The third definition takes “success” a step further. It looks at “success” as having a monetary value or recognition of some kind.

In publishing, this is thinking of “success” as getting a large book deal with a decent advance or making the New York Times Best Sellers list or winning an award.

But what if you’re an Indie author? Then you might think of “success” as not only publishing your book, but selling enough to break even or perhaps making a profit.

This is where the business side of publishing comes into play and we begin to see how both statements are true. An author at this point has to look at the money that is being spent on advertising, editing, book covers, blog tours and determine what can be paid for and when. Sometimes this even means making hard decisions about publishing another book. Can it be afforded at said time? If not, would it be feasible at another time? If one can’t afford to put another book out, does that mean one is a failure? No.

It just means you understand “success” or even running a “successful” business doesn’t happen overnight. It takes time and savvy to make a go of it.

After all, it was the snail who won the race.